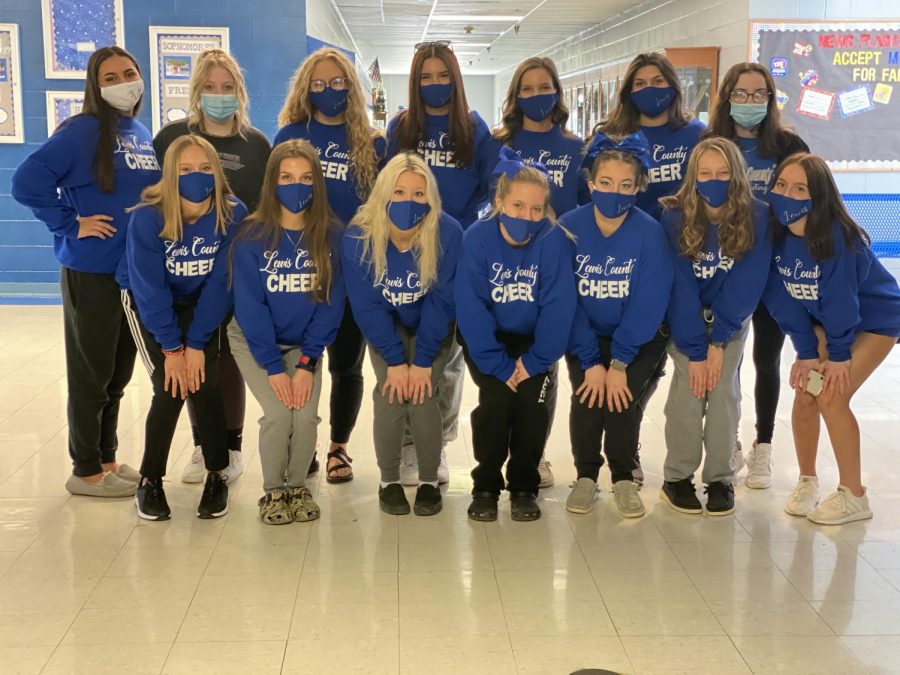 Weston, WV: Two different LCHS sporting teams will compete March 20 as both the cheerleading squad and wrestling team will be represented in state tournaments.

The LCHS Cheerleading Squad is making a return appearance at the WV AA State Cheerleading Tournament conducted in Huntington, WV while Bianca Jemen will compete on behalf of the LCHS grapplers in the WV Girls’ Wrestling Championship.

The LCHS drumline led the girls throughout the LCHS hallways on their way to their respective tournaments.

The 12-member competition squad is vying for a state title as they compete in the annual state tourney March 20. They are part of the 20-member cheer squad who represent LCHS at all home football, girls’ basketball and boys’ basketball.

The girls started preparing for this in August with daily practices as well as cheering at games.

They will perform a two-minute routine and a 40-second floor cheer in the bid for a state title.

The team earned the state berth by capturing the runner-up position in regionals. The tournament was slated to be conducted in November, but due to COVID-19, it was postponed until March 20.

The cheerleaders said they were ready to compete.

“I couldn’t have asked for a better group of girls my first year of coaching. They are determined, talented, but most importantly, kind. They’ve worked so hard to get here and even after being delayed for months, they have kept their drive,” Catie Nichols, head coach, said.

Nichols added that she appreciates the support demonstrated to the squad.

“We wouldn’t be where we are without the support of the community, students, and staff at LCHS,” Nichol said and added, “I’m excited to be able to watch them represent Lewis County this weekend.”

The team is coached by Nichols, Sarah Linger, and Tyler Foster.