Team Fishes Their Way to Nationals 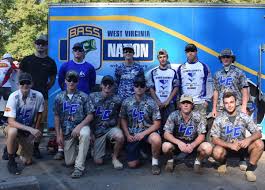 The BASS Nation Fishing team competed at the end of the school year for state and national titles.

In its second year, the LCHS Bass Nation Fishing club fished its way onto a state championship win.

“It was a dope experience. We’ll be pushing to get back there next year,” Kuhn said.

They are coached by Mr. Hunter McWhorter.  Each fisherman pairs up with another teammate and a boat captain to participate in a fishing tournament.

The state tournament was conducted at Stonewall Lake April which gave the LCHS team a little advantage as it was their “home” fishing territory.

In addition to the top two teams, the teams of Lucas Wright, Dakota Stout, Ryan Skidmore and Christian Mullins also qualified for the Nationals.

All qualifying teams advanced to participate in the National Bass Fishing Tournament at the Kentucky Lake on the Kentucky/Tennessee border this summer.

The team didn’t seem to have much luck at the National Tournament, but they all said it was a good experience and a good time for them. The B.A.S.S tournament was participated on Kentucky Lake.