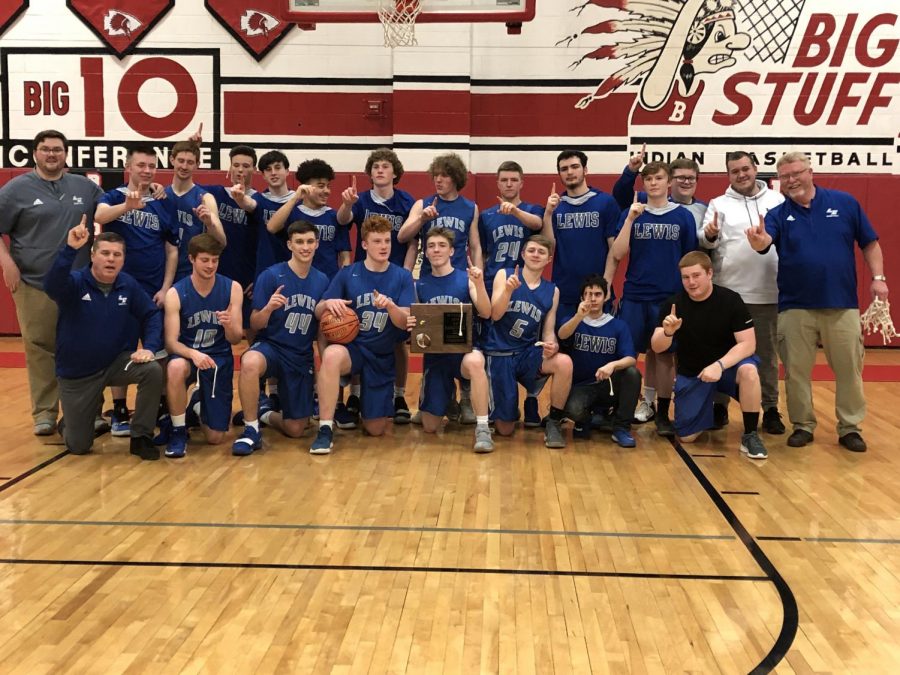 For the first time in 35 years, the LCHS Boys’ Basketball team headed to the WV State Basketball Tournament in Charleston March 14.

The Minutemen lost in the opening round to the eventual state runners-up Fairmont Senior 92-35.  The Minutemen were paced by Senior Luke White who had 14 points.

The Minutemen had a lead one time in the game when they went ahead 6-4 in the first quarter.  The Polar Bears bounced back scoring 17 unanswered points.

The LCHS Student Section captured the 2019 AA “Best Spirit Section” as LCHS took four pep buses while RLBMS took one bus.  Students had a “black-out” and stood the entire duration of the game, with the only sit-down time being at halftime.

They captured the Region II title by defeating Bridgeport 53-36.  They were paced by Kyle Gannon who had 20.

The Minutemen forced turn-overs and defended Bridgeport’s offense to widen the gap.

The Indians shooting was kept under 50 percent throughout the game.

The Minutemen played Bridgeport tight all year narrowly losing to the Indians at home, and losing in a regular season nail-biter losing 62-64.

The Minutemen are paced by a host of contributors including Kyle Gannon who had 20 points. Captains Shawn Moran, Caden Rohrbough and Luke White and Juniors Asa Post and Jacob Heater, contributed.  Three-point marksman Bradley Smith, senior, also helped with the LCHS scoring.

The Minutemen are coached by Charles Simms, Bill Linger and Joe Nichols.

The 11-16 squad was paced with winning 4/5 last ball games including three in the post season.

BU took the lead with less than ten ticks on the clock.

With 2.3 seconds left, a BU fan threw a tennis ball across the court while some BU fans thought time had expired and fled onto the court.  After the clock was re-set, a BU fan became stuck in the stands which halted the game even further.

Shawn Moran called time-out with 1.7 seconds left which put the Minutemen in scoring territory inside half court.  White got the ball down the baseline to Moran who shot the ball beating the buzzer for the 3 and the win.